For 100 years, the Plath family has been providing quality meats at almost the same location.

Emil Plath Sr. a German immigrant, who could speak little English when he arrived in northern Michigan, opened the original Sanitary Meat Market where Rogers City Dental is today. His timing could not have been better with the opening of the Calcite plant.

Emil outlasted other meat markets in town and made it through some tough times.

While so much has changed in a century, the business continues to find its success from the quality of product and the hard work put in by a third generation and a group of dedicated employees.

Tuesday, one week before the official anniversary date, the Plath’s crew teamed up to produce 4,000 pounds of pork sausage links. It was like any other day at the plant.

Jamie Plath was putting the ground up meat into the top of the “linker,” which shoots out perfectly shaped links onto a conveyor. There was a time when they all had to be twisted by hand. The business has gone through a few linkers since the 1970s.

Once on the conveyor, they were snatched up from both sides and boxed.

It is an interesting blend of employees.

Brian Kieliszewski is the longest member of the crew without the last name of Plath. He has been there on and off for 36 years. He gathered the pork to be ground up on one of the production lines, while the youngest men of the operation, Caleb and Ethan Jermeay, 20 and 18, put the boxes in the freezer.

It all happens at a rapid pace.

Another longtime member of the staff, Jeanine Kroll, was right in the middle of the production line. She has been there on and off since 1977.

The counter was quiet Tuesday morning, but it allowed John Plath to make some calls about deliveries which needed to go out on the northern Michigan truck route the next day, and check the Internet sales that started three years ago.

“People still like to call in their orders and talk to a person,” said John Plath.

If a customer walks in the front doors, which are the same doors Emil Sr. and his son Moe Plath posed in front of in th

e 1950s, when the keys of the business were ceremoniously passed from one generation to the next, whoever is closest to the front, stops what they are doing and heads for the counter.

The business will be honored at Saturday’s annual Rogers City Area Chamber of Commerce dinner at the Water’s Edge Restaurant. Rogers City mayor Beach Hall will be reading a proclamation, which the City Council still needs to approve, declaring November as Plath’s Meats month.

Cocktails are at 5, while dinner will be served at 6. Contact the chamber at 734-2535 to purchase tickets and take part in the celebration.

So much of this famous Rogers City business has been written during the last century and the Advance celebrates the occasion with a special insert this week, which covers the last 10 decades with articles, as well as current and historic photos. There also are many congratulatory ads to peruse. 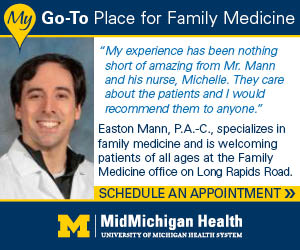